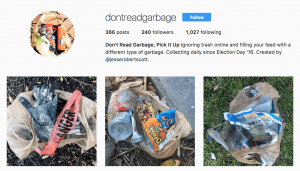 A mission was set one year ago following Election 2016: read less ridiculous/fake news and avoid vitriol on social media. Instead spend time picking up actual garbage to make your surroundings a better place live.

Our friend and full-time Senior PR Specialist at The Firm, Jesse Scott, who also spends time as a freelance journalist in Fort Lauderdale, FL, marks the one-year anniversary of his “Don’t Read Garbage, Pick It Up” project with a story in today’s Miami New Times.

Congratulations, Jesse! We know you’ve inspired many to participate in their own communities.

Urgency, innovation, compassion and collaboration are Three Square’s core values that are surpassed by The Firm’s performance and responsiveness. We value their expertise in media relations, as well as their dedication to bring public awareness to Three Square’s mission of pursuing a hunger-free community. The Firm is much more than a vendor; they are partners with a team of innovative people who really care about their work. They are not only an extension of our team – they are truly members of our team.