25 years in business is looking pretty good on us. And, the public relations, social media and video production awards are rolling in!

Through a joint nomination, The Firm and Comprehensive Cancer Centers (Comprehensive) were selected as a finalist for the 2018 PRNews Healthcare Communications Awards. The cause-related marketing campaign and public relations outreach efforts were related to Comprehensive’s skin safety awareness campaign. Launched in 2014, the campaign provides free (yes, free!) sunscreen at several locations with several organizations across the valley. These organizations include the Las Vegas 51s; Cadence master-planned community; the PENTA Building Group; the Springs Preserve, Downtown Summerlin; and Wet’n’Wild. 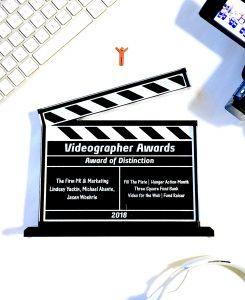 The Firm was also recently recognized by the Videographer Awards.

We earned an Award of Distinction  for our production of a fundraiser video for the web, highlighting Three Square Food Bank’s 2017 Fill the Plate and Hunger Action Month initiatives. The video was a mega-mix of sorts, pulling together Las Vegas entertainers to encourage viewers to participate in the month long community food and fund drive.

We also received an honorable mention for our work with the UNLV Performing Arts Center, developing an event video for the web which promoted the performance of violinist Taylor Davis. The video depicted comic book store shoppers in a quiz show set up, trying to guess Davis’ take on well-known film and video game theme songs.

Interested in creating potentially award-winning work? Drop us a line at 702.739.9933 or at newbusiness@thefirmpr.com

I have worked at, and with, many agencies in my career and I know that the right one can bring a tidal wave of increased brand recognition and goodwill. The Firm has been this agency for us. They have gone far beyond our expectations, more than doubling our ad equivalency value in under a year, helping us to educate the public about the evolution/revolution that our Library District is undergoing. Hire them and fasten your seat belt!